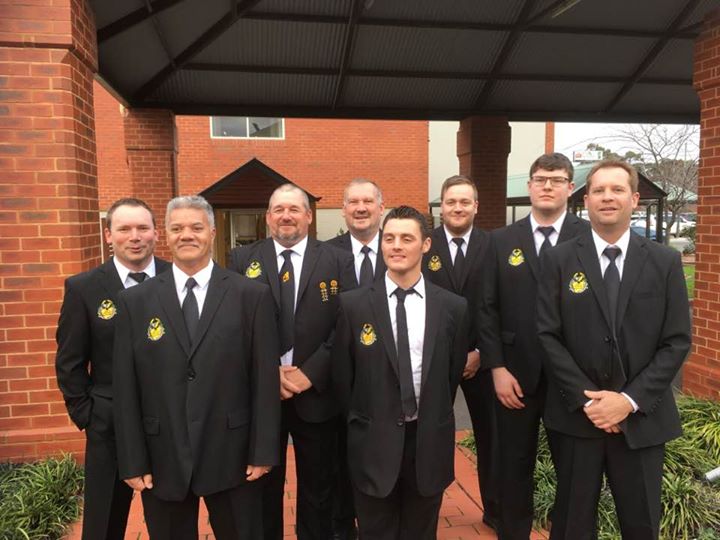 This years event was held at the All Seasons Hotel in the City of Bendigo. The venue was first class and the playing conditions were of a high standard.

This year the rooms at hotel were functional and catered to our needs, The location was a bit isolated and nothing was readily available for the players to wander to if they wished but the hotel itself catered for most of our needs. The proximity to the playing rooms and relaxed location for us all reflected in our successes, particularly the Ladies.

The men as a playing group again cannot be faulted, we had six changes in the team from the previous year in Perth as Champions but this did not hinder the playing group. As last year, I am again very truly humbled by the manner in which the playing group managed themselves and displayed outstanding team spirit and camaraderie. To lose the starting six from a winning group in 2015 and perform as well as they did was exceptional, a real tribute to their desire for success as a team.

The smooth running of the team is managed by the Team Manager and again Glen McLeod in his 4th championship showed his organisational skills were at a very high level in all tasks that he undertook this year. Glen, once again played a valuable role in the team’s success in 2016 and look forward to Townsville in 2017.

Tim and Nat Runner Up against the Victorians, great effort.

Pacific Masters – Winners Adam Rowe and Leeanne Watkins – Western Australia, a terrific start to the week and success achieved by the teams.

Players of the future went to Brenton Lloyd and Ursulla Bennell at the Australian Championships good recognition for a very good 2016 Championship.

Special mention for Tim Pusey, he won all 6 Singles that he played, no other player at this years championship did that and as a Rookie all the more noteworthy.

A special thank you to Peggy and Patsy for doing the book in the teams event and Peter Mac, a great job. They are both now officially computer Guru’s after learning the technology for the Peter Mac and Teams event, well done.

This year again was the rebuilding of the WA Men, without the starting 6 from 2015 one would think we would struggle, but Glen and myself were super proud of the effort from the players. They played hard but fair and demonstrated their ability both on and off the board. I look forward to Townsville in 2017 where Glen and I hope to continue the development and regrowth of WA Men’s darts in the National Championships.